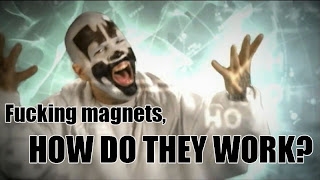 Fuckin' facts, how do they work?

As the Gathering of the Beckalos draws nigh, the only question is what the over/under is on the per-dipshit IQ range of these knuckle-dragging, illiterate, barely-closeted racist troglodytes. I say low double digits, probably around the 25-30 range. Maybe Tila Tequila will show up and they'll pelt her with bottles and shit, who knows?

They're such rebels -- just ask them, they'll tell ya -- taking on The Man, these sainted common folk, not realizing that a couple of robber barons are bamboozling them, as ever, and that they will throw out one set of bums for a crazier, less articulate set of bums.

Crazy Uncle Joe has a cracker of a post whacking the usual moles, but he loses the thread in this passage:

You never hear them say it, but neo-conservatives understand that they have a mean streak down inside. They also know if they want to share in the national plunder, they must win hearts and minds.

Most educated American liberals, however, believe simply being progressive makes them, by default, the nation's saviors -- morally and intellectually right in all things.

So when educated liberals look up from their copy of The Nation or the Jon Stewart show, they behold a chilling sight: Beefy mobs waving teabags and demanding tax cuts to help pay for new schools and bridges, Sarah Palin emerging from the ashes of the McCain campaign to become the high priestess of the uncurried tribes, with a Mormon named Glenn Beck exhorting millions of fundamentalists to seize the country. They feel that something has gone terribly wrong with America.

Immediately they conclude that it is the American people's fault through their backwardness, incomprehension and misdirected anger, and that maybe it serves them right for not rallying behind the flying progressive standard.

"Ah yes," they wailed, the people have let us down. They are absolutely disgusting!" liberals agreed. And they still agree. Read the comments on Huffington Post or Daily Kos.

Bah. No doubt there do exist the caricatures of self-righteous bien pensant libruls, just as surely as there really do exist toothless goobers who think their broken-down Camaros are possessed (read Bageant's Deer Hunting With Jesus for that one). Or idiots, many of whom collect Social Security or Medicare, who were educated in public schools and take public streets to the public park for their self-contradictory anti-gubmint protests, completely indifferent to the sheer cognitive dissonance.

So yes, there are most definitely people -- some liberal, some not, most having at least some level of education but not necessarily -- looking down at the Palinoids and Beckalos. It is not, as Bageant seems to posit, mere elitism. It would be easier if that's all it was.

Rather, it is a frustration with their preening ignorance, the pride they take in knowing absolutely nothing true or factual, the bad faith with which they infuse every contrived argument and crusade of theirs, the ease with which they generate yet another imaginary tempest in another phantom teapot, rolled up in their badly-cobbled astroturf philosophy. How is that supposed to be worthy of respect, or even civil disagreement?

It would be swell if they could be honestly engaged with facts and ideas and even solutions, but they don't want that, they want something to rally against, something to hate. There's no engaging with that, any more than you can engage or reason with a bratty kid in the cereal aisle. These people are morons, and they're fucking hypocrites. I cannot figure out how an honest broker (were there one in the political arena to begin with) would get a handle on this crew.

Really, I would say the Koch brothers are the elitists in this narrative -- multi-billionaire brothers who apparently spend every waking moment figuring out how to take it with them, and bamboozle the peons into believing they've been done a favor. And it's a neat trick, truly impressive. In the last decade this country has managed to return to the Gilded Age, robber-baron levels of disparity, and roll the rubes into thinking it's in their own best interest.

Ideally, a 1-2% redistributive tax on high-flyers like the Kochs would poke in the right direction toward more diversified ownership of assets, production, and distribution. But seeing how the Kochs operate, making ever more and more, but never quite enough, and dedicating their pelf to the lowest forms of propaganda and sleazy astroturf stunts, it almost deserves to be completely redistributed. It takes some fucking balls to throw tens of millions into this "Washington is run by thieves and crooks" schtick, while simultaneous pouring millions into an army of lobbyists to ensure your mega-conglomerate can keep poisoning the planet.

But in the end, as a utilitarian and an empiricist, I can't help but admit that the Kochs are rational actors in this, even if their political power seems to be derived from the cynical manipulation of irrational actors. It's unethical, but it makes sense.

However, the people who allow themselves to be fooled by this stuff have no one to blame but themselves. They've "refudiated" facts for emotion, common sense for truthiness. They've abdicated any entitlement to a civil response to their braying nonsense. They insist that Obama is a moooslim cokehead with a fake birth certificate who is socializing America, even though the man has continued almost every single policy from the last administration.

They all talk tough and front like rugged individualists, but with all the bluster, we've yet to hear of one giving up any gubmint assistance they might receive. Real self-sufficient there, sporto. When you burn your Medicare card, then we'll be impressed.

These people are not remotely intellectually honest, they're not even pretending to be interested in that. They are motivated by spite and lies, hate and fear, and at the heart of it, they're just pissed that they're not getting what's coming to them. They will not believe you if you prove to them beyond a shadow of doubt that the people bankrolling their little short-bus-to-Warshinton distraction are every bit the privatize-profits-socialize-debt motherfuckers that Obama's buddies on Wall Street are. Meet the new boss indeedy.

Bageant needs to understand that it is not everyone else's job to try to engage their impenetrable claptrap and "compromise" with utter stupidity. I seriously have no clue what I'm supposed to say to someone who seriously thinks Barack Obama is a "socialist", any more than I would know what to say to someone who insisted that Nolan Ryan was a power forward for the Lakers.

It's not that we're unwilling to help them comprehend precisely why Obama is not a socialist, it's that we know they don't give a fuck. Facts are of no use to them; things are what they say they are. There's a legitimate reason to be concerned that people who are proud of having no use for logic or facts, who invent reality as they go along, might accrue even a toehold of power. It benefits no one, including themselves. Well, that's not entirely true -- it benefits people like the Koch brothers, and Dick Armey.

But at this rate, if the Becktards get what they think they want, they'll get what they really deserve -- a swift kick in the ass from cruel fate. Try as I might, I cannot generate a drop of sympathy for any of them. Sometimes people are just their own worst enemies, and all you can do is get out of their way, or they'll take you down with them.

The problem with these idiots ending up getting the swift kick in the ass that they so richly deserve is that that kick will also land firmly on the asses of those of us who know better.