I have asked this question, with slight variations, many times over the years here:  if you had a billion dollars, what would you do? Specifically, what sort of activities would take up your day, which is now completely wide open -- more money than you could possibly spend, all the time you could ever want to do all the things you really want to do, with no concerns whatsoever about commercial viability or making a living.

Now, as celebrity chefs would say, let's kick it up a notch or two. You are worth ten billion dollars, and you are the chief executive of the United States of America, so you have real power and standing to go with your material wealth. What sorts of things do you choose to do?

You can travel anywhere, anytime, speak with pretty much anyone you wish. You can meet your favorite artists and actors and musicians, the people whose work has added to your inner life, made you feel things worth feeling, reminded you with their songs and stories why life is worth not just living, but experiencing, engaging.

You can almost literally do anything and everything you want, at any time, at any place.

Depending on the day, Trump claims to be worth anywhere from four to ten billion dollars. Since his real-estate portfolio is mostly private, and he doesn't pay taxes, there is no documentation to verify. But even Forbes magazine, whose annual wealth list generally amounts to padded toadying, can't seem to push Fatboy's net worth over three billion.

I mean, you know Trump's lying, because there is no personal anecdote or data item too large or small for him to lie about. About the only things you know for certain are his date and place of birth, and the names of his close family members. Everything else is a lie.

But let's say for the sake of argument that Forbes is somewhat in the ballpark; let's say they exaggerated his net worth by about two hundred percent. So he's actually worth only one billion dollars. That's still a lot of fucking money. And you have that political and cultural power of the office you hold. 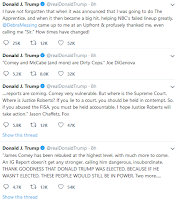 So how's your holiday weekend going?

Again, more money than most hard-working people will see in ten generations, a wife, five kids, ten or so grandkids, infinite options for your day. And this is how he chooses to spend it, whining for the millionth fucking time about James Comey, and telling another "sir" story about the chick from Will & Grace, from like fifteen years ago.

It is impossible for me to complain about this. I think it is glorious. This right here is the vengeance I always wanted, when I think about it. The man could have anything he wants, and he's such a pathetic dullard, this is all he wants, to be seen as an embittered, crazy old man ranting about the last thing he saw on Fox & Fiends.

The only thing that would make this better is if he was doing it from Leavenworth, but this is still pretty good. He's nothing but a miserable old fuck, surrounded by people just like himself -- transactional to the bone, no genuine feeling or friendship anywhere he goes. Everyone either wants to suck up to him to get something out of him, or they want to tell him what a worthless turd he is. And that's his schtick with the rest of the world, so he gets nothing out of that.

One of my favorite things about Obama's tenure as imperial custodian was how much joy he clearly got from using the cultural power of the presidency. He likes music and books and sports, so he invited musicians and authors and athletes he enjoyed as an unabashed fan. He made the connections between art and greater civic life, and tried to put those forth as a show of the wonderful things people can create when they are sufficiently inspired and motivated.

Trump, on the other hand, is only a fan of his own vainglory and ricockulous self-regard, so this is really all there is for him, sitting at his own resort, watching propaganda teevee, cheating at golf, and shitposting sitcom actors. Waiting to see if the hurricane will visit 180 mph of karma on his roach-infested dump in Florida. That's exactly what he'll do when he leaves office, however that happens.

Whatever your political persuasion, whatever your opinion of Trump, you have to admit that's pretty damned pathetic. I personally know people who get by on fifteen bucks an hour, barely a pot to piss in or a window to throw it out of, working jobs they hate, no time for nothing, but they're over on the beautiful Cali coast right now with their families, enjoying the ocean, maybe grilling up a few burgers, enjoying life.

Hell, I've knocked out some lengthy posts in here over the weekend, but that's a blip in the middle of tons of other fun stuff -- playing and recording some musical ideas, working on a few creative writing and graphic projects, spending time with my family, firing up the barbecue and cracking open a few beers.

I mean, I gave these two schmucks a hard time about their weekend activity, but I also think there's a very strong possibility that because of their socioeconomic status, their geographic location, their clearly bad angle on interpersonal relations with flesh-and-blood humans, their choices were far more constrained even than most working-class dogs. For the millionth time, Trump can do anything he wants, and he wants to do this. I bet he misses giving Robert Pattinson unwanted dating advice, and trolling Rosie O'Donnell (I hear she's fat, you guys!).

That's just so awesome. If that's what you consider winning, I'd hate to see losing. I actually derive joy from knowing that it is impossible for him to derive real joy from anything in life. The only thing that makes him "happy" is fucking other people over or taking a public shit on them, and that's the happiness of the sociopath, of a person who literally does not know how to be happy. All those privileges and breaks his entire life, and for this.

The man is a complete waste of power, money, and fast food. Jesus, go play with your grandkids and leave us alone for one fucking day, you weird, wretched old man.
Posted by Heywood J. at 2:59 PM

This is great, thanks for posting.

Really brings out the TRAGEDY that the Trumpalos have foisted on us, doesn't it? As the Disunited States disintegrates (I am old enough I hope I miss the fun), I wonder if you can to some extent generalize this and ask what Late Stage Catabolic Disaster Capitalism and Bombs America is contributing to world culture?